The controversy about Christopher Colombus’s descent : the noble seafarer from Chios or the Genoese wool weaver?

There are a lot of theories about the descent of Christopher Columbus or Cristobal Colon as he became known after his expeditions on behalf of the Kingdom of Spain. However, his true identity remains unknown or at least unclear.

In his writings during his life time, one is given the impression that admiral Colon has tried meticulously to conceal his origins as if he was hiding a family secret concerning his past. Colon has provided us with a number of hints regarding his descent, but he has continuously avoided addressing the issue of his birth place and his family roots. His contemporary biographers -even if some of them were closely related to him- failed to identify his ancestry leaving the modern world with a plethora of unanswered questions concerning the first years of his life. Among the currently available and historically valid theories about Columbus’s lineage is the Genoese theory which has been presented to us as the most predominant one. Nonetheless, there is clear evidence that Columbus was closely related to the island of Chios, which he visited a number of times before he crossed the Atlantic. 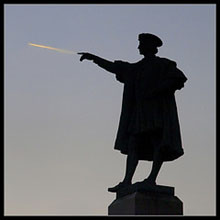 A lot of historians are quite skeptical towards the idea that Columbus was just the son of a woolworker from Genoa, whose house is still located near the medieval city walls of Genoa. Definitely, there has been someone named Columbus that originated from Genoa (contemporary with the famous navigator) and was indeed a woolworker, but many modern researchers believe that we have to deal with a typical case of two people that lived during the same period, shared the same name and surname but originated from completely different walks of life. It is undoubtedly contradictory to common sense to claim that someone lacking off-shore navigation experience could be ever trusted by the Queen of Spain for such a venture that would put into jeopardy the reputation of the whole Empire. Hence, Colon could not have been the son of a woolworker or even a woolworker himself with limited sailing experience and lack of high social connections.

Although he was unquestionably a citizen of the Republic of Genoa, Colon never admitted that he was from the city of Genoa and he never asked for shelter or any kind of help or support from Genoa or other Italian States. This can be explained by the fact that the Republic of Genoa was a state and not a city and therefore being Genoese did not necessarily mean that someone was born and raised in Genoa. The Columbo family of Genoa was an illiterate family of wool weavers, but Columbus the discoverer of the Americas was undisputedly an educated man with a sound knowledge of the Ancient Greek and Latin literature. His obvious educational background and his maritime experience attracted the attention of the Spanish Court that entrusted him the command of a small fleet to sail the Atlantic. 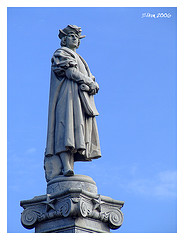 The two major and most dependable sources describing Columbus’s life come from people who lived and sailed together with the Admiral and knew him very well. Both of them -that is his son Ferdinand and Bishop De las Casas- saw or had a copy of the original journal of Columbus and in their account try to clarify the misconceptions about Christopher’s life. From their work it can be concluded that the admiral belonged to the Genoese nation, which cannot be regarded as solid evidence for his origin and exact place of birth. Furthermore, Columbus had continuously referred to himself as ‘Columbus de Terra Rubra’ that is Columbus of the Red Earth and he never stated that he was from Genoa. In addition, red earth can be encountered at the Southern part of the island of Chios where the mastic tree flourishes. It is common knowledge that Columbus stayed for a long time in Chios where he recruited some of his sailors and obtained maps from the locals, since Chians had always been famous seafarers and fleet owners. Finally, the dauntless captain had claimed in his correspondence that he was not the only Admiral in his family and that his ancestors had always followed the sea, which is contradictory to the theory that he came from a family of wool merchants. More importantly concerning his descent, his son Ferdinand after a thorough search for his father’s origins prior to his written account he assured that he could find no evidence to support the idea that his father’s family could be from Genoa. As he clearly stated in his book, he was not able to find out how and where his father’s relatives lived in Genoa after a close examination of all social classes of that period. Also, as De Las Casa informs us, Columbus had a cousin called Colon the Younger or Georgios Disipatos Palaeologos who was his kinsman that served along with Columbus as a pirate (corsair) the French navy after the fall of Constantinople and he became known as George le Grec. The connection with a member of the family of Palaelogoi constitutes strong evidence that the Admiral had at least Greek roots.

However, the question that rises is that if Colon was indeed of Greek origin why did he avoid admitting it? The 15th century and the centuries that followed were particularly unfavourable for the Greeks given that the Greek (Byzantine) Empire had fallen to the Turks. The Turkish authorities used to persecute Greek nobles because they were afraid of a counterattack organized by the exiled Greek aristocracy that would take the form of revolution against the newly established Ottoman status quo. Moreover, even though Greeks were employed in the West because of their expertise on various subjects they were regarded as second class citizens who were also despised for being Orthodox. The Catholic Church was treating the Greek Orthodox Christians as heretics and traitors especially after the failed attempt for the Unification of the Churches in Florence and Ferrara between 1438 and 1439. Considering these parameters, Columbus -and any person in his position- would carefully conceal his identity and Greek lineage in those hard times.

His personal profile and background education. 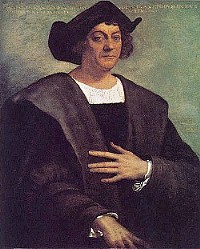 Columbus was a redhead man with blue penetrating, nostalgic eyes and fair complexion dressed in Genoese fashion. Most likely was born in 1451 but his place of birth remains obscure. From written evidence it can be gathered that he sailed to Chios in 1474 and stayed on the island for about a year. Many times he refers to the island of Chios in his journal and particularly to its red soil and mastic gum production. He banked at St. George’s bank in Genoa which was also used by the Maona of Chios for all its business transactions with the Commune of Genoa.

Clearly Columbus was a man of strong educational background. He was knowledgeable about navigation, astronomy, philosophy and finally he had an excellent command of languages. Apparently, there is no text which appears to be written by Colon in Italian. His correspondence with the Spanish Kings or the Pope was in Spanish or Latin. Columbus could also write in Greek language. This is confirmed by his own double log book system that was consistently maintained during his journeys in which real information about distance measurements appears in Greek leagues. Yet in his favourite book Imago Mundi by Cardinal Pierre d’Ailly Colon kept notes in the margins in Greek. 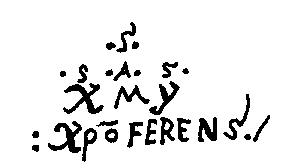 Further evidence supporting Admiral’s Greek cultural background is put forward by the fact that he used the Greek letter X (chi) when he wrote the word Chios (Χιος) and also in his own signature that has been described as Greco-Latin Xρο-Ferens, where ferens is the Latin version of the Greek word Φερων which means the one who bears (Christ-bearing=Χριστοφορος in Greek). Finally, in his log book and letters he marked his pages with the Greek letter X (either for Chios or for his name in Greek beginning with the Greek letter X). He also named Cape Maysi in Cuba by the Greek letters ‘Alpha and Omega’ (A & Ω) a symbolism of Jesus Christ widely used among ecclesiastical circles in the Catholic Church even nowadays denoting God as the beginning and the end of the world.

To summarise, the Admiral was undoubtedly a unique and multidimensional personality, fuelled by his cultural and educational experiences acquired in the 15th century world arena and boosted by a sturdy inspirational drive and strong will. He could not have been of humble origin as stated by the Genoese theory describing his descent, because people of similar family background could not have been educated and/or received a royal audience by the Spanish sovereigns. Therefore he must have been a member of the European aristocracy and an extraordinary man with excellent public relations and impeccable credentials. 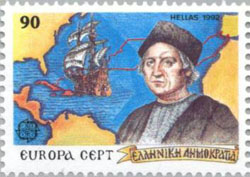 In present day Chios, the house of Colomvos situated near the main square of the village of Pyrghi -where it is believed that Admiral stayed when he visited the island- still survives. The surname Kolomvos is a family name carried by some people of the local populace and a priest called Colomvos from Pyrghi claims that his name traces its ancestry back over 600 years at the beginning of the Genoese period in Chios during which many intermarriages between Greek and Genoese families occurred. The name Columbus (Κολομβος in Greek) is carved in stone above the door threshold of local houses in Pyrghi. But above all arguments mentioned above, stronger than the provided evidence is the profile of the Chian people throughout the centuries that perfectly matches the character, the skill, the deep knowledge and even the idiosyncrasy of the famous seafarer.